Going into the 7th week and I feel I have been on a high speed, scary rollercoaster ride!  Things are starting to feel a little more familiar but life here still seems a long way from what I am used to and I guess it will probably continue to feel this way.  The house is more homely and we are spending time improving the garden.  The garden is lovely and has beautiful views of the hills, and of Kilimanjaro in the evenings when the clouds clear and the sun is shinning on its snowy peak.  The house needs more furniture and more home furnishings but as they say here “pole pole” (slowly), it is getting there. 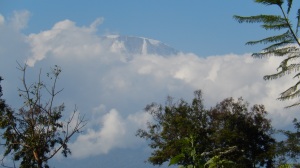 Some days have been horrendous, I have hated it and have cried and have wondered why the hell I am here!!!  Other days I have felt I could stay here for quite some time.  It is such a shock and such a different world…  I have relaxed, read what feels like hundreds of books, cleaned, tidied, shopped and slept and am now ready for a change.  I have been offered two paid jobs which is extraordinary as really was not expecting it and was lead to believe that this would not be possible!  One is at the school, one day a week as a Volunteer Coordinator.  It is a new role and involves recruiting, supporting and monitoring volunteers who will run extra curricular activities.  I am in the process of designing how it is going to work and it is rather enjoyable but not particularly challenging.  The other job is full time but flexible and is for a charity.  They run two hostels where volunteers stay and my role will be to facilitate the recruitment, support, do the accounts and whatever else needs doing.  They have 20 projects in the area and over 50 volunteers so I will be busy and it should be interesting.  They also run a safari company so lots of insider info on safaris!!  The office is in their house, it is a small room overlooking a tempting pool which I am welcome to use when I get hot – I might get very hot on a regular basis!  They also give me toasted sandwiches for lunch.  So with both jobs we should be pretty comfortable and I shall not be bored at home anymore!  I am looking forward to meeting the volunteers and visiting the projects and maybe get involved in some safari stuff.  A bit different from social work, thank goodness!!

Geoff has been on a hardcore first aid course which covered snake bites, altitude sickness and all sorts of tropical stuff so there is no need to worry about such matters anymore.  Joshua continues to enjoy school and likes it here, Marianne is struggling a little but seems generally happy.  Our dog is growing well but is a useless guard dog despite the security guard’s attempts at making her more vicious.  Still waiting for pussycats…

So nothing much has happening until this weekend when we suddenly decided to take ourselves on safari!  And why not.  So picnic packed, off we went in the tank to Arusha National Park, about an hour’s drive from our house.  As we got close to the park entrance the car started billowing smoke and we had to stop in the wilderness.  After looking aimlessly into the engine for quite some time, we decided to fill the radiator and lo and behold the tank was happy once again!  We were warned that if you break down you just wait and someone will help you as there are no recovery services, as it was the very few passers by who walked by just stopped and stared at us!  We continued into the park where we had to fight to get past a bunch of guides at a very, very small ticket window.  it took over half an hour to buy the tickets but eventually we were in.  As soon as we drove in we spotted the elephants who apparently are not easy to see (not sure why as they are massive) but there they were!

As we drove on we spotted Colobus monkeys, blue monkeys and many, many troupes of baboons.  It felt like being in a David Attenborough documentary.  Most animals were close to us and it was quiet and beautiful  It was great to go in our tank so that we could stop anywhere we wanted and for as long as we wanted. 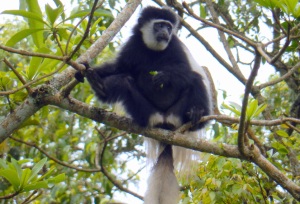 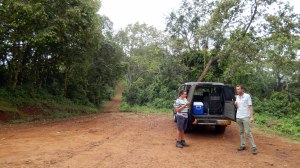 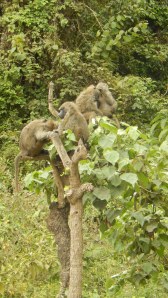 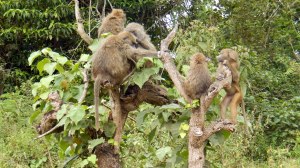 The last picture is not mine but shows what they look like!!

We carried on to the crater where buffalo were grazing and when it opened into savannah we saw the giraffes and zebras! 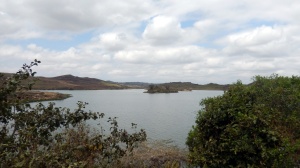 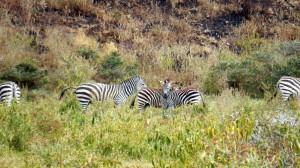 We ended with the huge lakes where thousands of pink flamingos are nesting at the moment.  Although this is not the biggest park it was extremely beautiful and very easy to drive around. 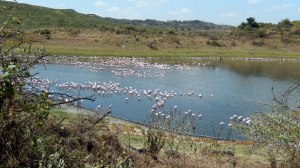 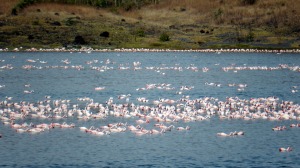 The next day, Geoff and I went on a walk around the area where we live.  We got lost and ended up walking for a couple of hours.  We walked though a huge coffee plantation which slowly became more and more tropical opening onto fields of bananas and papaya trees and into a beautiful village.  We were treated like celebrities with people wanting to shake our hands and practice their English as well as many children who wanted to touch us!!  Very odd as we are used to walking about and being ignored…  And we saw these weird birds, anyone know what they are?!  They were rather large and sounded like small planes when they flew above our heads! 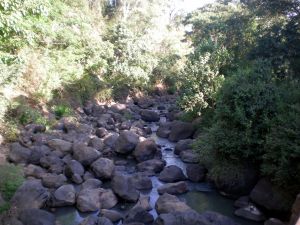 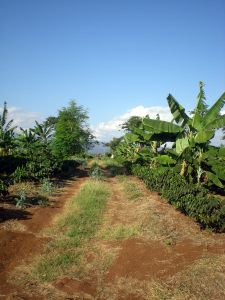 More adventures to follow in a few weeks.  We are driving down to the coast in three weeks time and going via some mountains and villages.